The Alsace lies on the eastern French border with Germany - it is historically much-disputed and was for many years part of western Germany, known as Elsass. It is to a certain extent cut off from both countries - from Germany by the River Rhine and from France by the Vosges mountains, a geographical influence of much significance meaning that the region is one of the driest in France. Its latitude, combined with the lack of rain allows for a long, cool growing season and the best vineyard sites are to be found on south/south-east facing slopes on the lower reaches of the Vosges.Wine production is largely varietal, and around 90% of wines are white, with Riesling, Gewurztraminer, Pinot Gris, Muscat and Pinot Blanc all playing a major role respectively. Red wines are mostly produced from Pinot Noir and tend to be light and delicate in style. 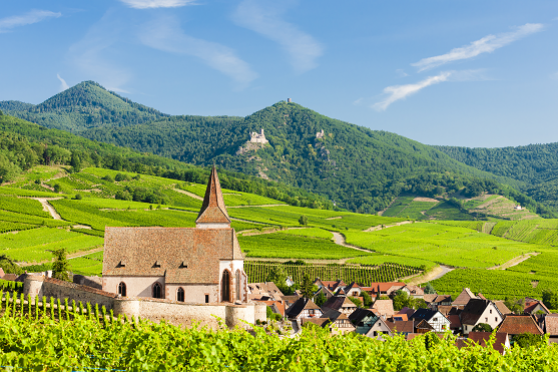